Dino De Laurentiis belongs to that small group of film producers who became as infamous as the work they left behind—the hucksters and con artists of cinema who carried on the tradition started by P.T. Barnum in which the showman was as important as the show itself.

But he didn’t start out that way. He produced his first film, L’amore canta,in his native Italy in 1941 and established himself as a powerful behind-the-scenes force in European cinema over the next three decades, financing Frederico Fellini arthouse films and big Hollywood co-productions like King Vidor’s War & Peace and Roger Vadim’s Barbarella, Queen of the Galaxy.

He was hugely successful but, apart from the nerds who paid attention to film credits and movie posters, he wasn’t even close to being a celebrity. That all changed when he made the decision to remake one of Hollywood’s most beloved classics. 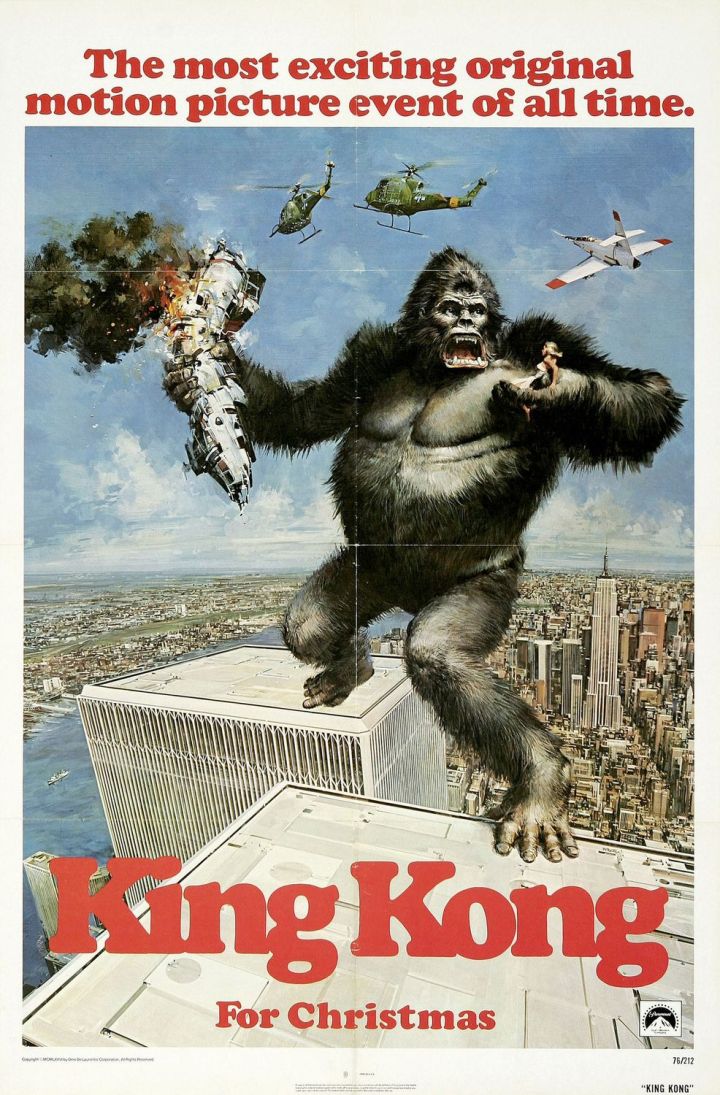 There’s a reason why no one calls the film that resulted “John Guillerman’s King Kong” and that’s because the hype that preceded this 1976 blockbuster was so perfectly orchestrated to showcase the brazen chutzpah of its producer, that to attribute its existence to anyone else would seem wrong.

In fact, 38 years later, this hype is often better remembered than the film itself, which is usually mistakenly dismissed as a flop and an embarrassment. This is because the promises De Laurentiis made about his remake were so outrageously confident of its greatness that no film could ever live up to them—much less one that had to settle for Rick Baker in an ape suit, instead of the life-sized animatronic marvel of engineering that cost millions and millions to create and never actually worked.

The thing is, though, those of us who can look past this one huge flaw all tend to notice the same thing—De Laurentiis’ (sorry, John) King Kong is a truly fun and even sometimes great movie. Some of us assholes (I’m looking at myself in a mirror right now) would even go so far as to insist that it is the best film in the Kong franchise—(slightly) less dated and thematically richer than the original; less padded with useless character development and self-indulgent childhood wish fulfillment than Peter Jackson’s only-occasionally transcendent 2005 attempt; and even goofier and more entertaining than the 60s bootleg Japanese versions featuring Godzilla and a mechanized version of King Kong that couldn’t be blamed on Carlos Rambaldi.

Also, it gave us Jessica Lange—the human equivalent of sunshine!

Despite its reputation to the contrary, De Laurentiis’ King Kong was a hit, which was more than could be said for many of the films he followed it up with, including 1979s Hurricane, a forgotten flop whose lost millions were a loss leader for the millions more he made building the on-location tropical resort used to house the film’s cast and crew.

Into the 80s, he found success with the Conan franchise (turning Arnold Schwarzenegger into a movie star in the process) and a whole lot of failure with Dune, which he foolishly attempted to market as a new Star Wars, instead of an ambitiously weird David Lynchian take on an ambitiously weird stoner sci-fi literary franchise (as an amends to Lynch, De Laurentiis’ production company financed and distributed his much more influential follow-up, Blue Velvet).

And somewhere during all of this, 10 years after it all started, it was decided that they would return to the great big ape once again. The temptation is to assume that this was a desperate attempt to return to a project that had worked so well before after a series of embarrassing disasters, but the fact is that De Laurentiis’ biggest money-loser of that period—the James Clavell adaptation Tai-Pan—was released the same year and made concurrently with King Kong Lives.

Instead, one gets the sense that beyond the money he expected to make, De Laurentiis wanted to return to the movie that made his international reputation, albeit in a much smaller and less exorbitantly expensive scale. There was—of course—a major hurdle that had to be cleared first. How do you make a sequel to a film that ends with the very final death of the only character anyone in the audience gives a shit about?

When the producers of the original King Kong faced this same problem, they retroactively made their star a daddy and had The Son of Kong found on Skull Island by the same dudes who stumbled upon his father. But screenwriters Steven Pressfield and Ronald Shusett had an advantage the original filmmakers didn’t—significant advances in the development of life-sustaining surgery.

In their screenplay, Kong’s seemingly fatal fall from the World Trade Center wasn’t enough to stop university researchers from successfully restarting his heart and keeping him alive via medical machinery for the decade it takes to build the artificial heart required to save his life and get him ambulatory again. Unfortunately, the surgery is declared impossible by head doctor Amy Franklin (a post-Terminator/pre-Beauty and the Beast Linda Hamilton), who determines it cannot proceed without a large supply of plasma that does not exist, since Kong is the only creature of his kind in the whole wide world.

Hank Mitchell (handsome journeyman Brian Kerwin) literally sits down on the world’s only other giant ape—a gigantic female ape who should probably be called Queen Kong, but is instead called Lady Kong because she and King are not married yet.

Fortunately for the university that invested millions in the creation of the artificial heart, a jungle explorer in Borneo named Hank Mitchell (handsome journeyman Brian Kerwin) literally sits down on the world’s only other giant ape—a gigantic female ape who should probably be called Queen Kong, but is instead called Lady Kong because she and King are not married yet.

For an exploitative jungle mercenary, Hank ends up having a heart of gold—especially when he realizes that Lady Kong has a bit of a crush on him. As much as he appreciates the cash he gets from the university, he’s still genuinely concerned about how Lady is treated—as much as Amy is concerned about the health of King and the possibility that having a hot female Kong around might lead to unpredictable shenanigans.

Speaking of, pretty much as soon as King gets his new heart, he uses it to get a boner from the smell of Lady in the distance. He easily escapes and frees Lady so they can cavort together in the wilderness in a scene that doesn’t at all seem like two dudes in ape suits pretending to be carefree lovers on an impromptu picnic.

As disappointing as Rick Baker’s ape suit was after all of De Laurentiis’ hype regarding the technical advances of the first movie, it still featured an important element missing from King Kong Lives—Rick Baker inside of it. There were many moments in King Kong where the combination of suit, effects and performer broke through the uncanny valley and created a character that felt real and true-to-life, but this never happens in the original, where the two ape characters barely rise above the level found in King Kong vs. Godzilla. 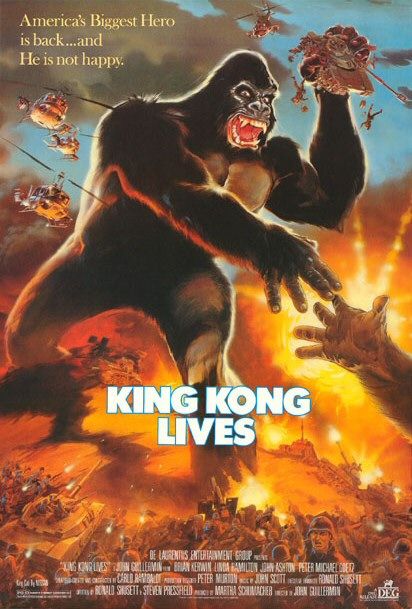 In fact, the biggest disappointment found in King Kong Lives is that it never manages to find a real moment of cinematic beauty amongst all its abundant fakery. Director Guillerman (returning for the sequel) had previously been able to inject some moving and visually impressive set-pieces in The Towering Inferno (Robert Wagner’s burning man ballet) and Kong (the scene where Kong bathes Jessica Lange and gently blows her dry—a moment so surprisingly poetic that Pauline Kael singled it out in her positive review of the film), but nothing here rises to that level. Those other two films were B-movies that occasionally transcended their origins to feel like something greater than they were, while this one is a B-movie that often feels like it was made for syndicated TV.

A major part of the problem is that the film never finds the right balance between the inherent pathos of a Kong movie and the need to showcase acts of rampant destruction. King Kong Lives ups the ante with a quartet of gun-crazed rednecks who go after Kong and behave so stereotypically badly that we’re meant to cheer when he tears one in half and laugh when he eats another and has to dig the man’s hat out of his teeth. The problem is that we can feel the manipulation required to make us excuse these murders. The movie wants us to enjoy this violence, while also acknowledging that Kong isn’t a monster, but an innocent creature transported into a civilization not capable of dealing with his existence. And it doesn’t work.

But if I had to guess why King Kong Lives failed at the box office and faded from public memory (apart from how—when it was made—Dino appeared to be the only person alive who remembered that the first film had been a success), I’d have to blame it on the biggest hit of that same year—Top Gun.

This same sense of anti-authoritarianism found its way into the sequel, but times had changed and in the Reagan-era audiences wanted to cheer for the military that kept them safe from the commies.

The 1976 King Kong—as written by Lorenzo Semple Jr.—was very much a product of its time (it even features a Deep Throat reference), especially in the way it depicted authority figures as essentially corrupt and untrustworthy. The film’s villain was oil executive Charles Grodin, who saw the big ape as the ultimate way to promote his company’s product and superiority. This same sense of anti-authoritarianism found its way into the sequel, but times had changed and in the Reagan-era audiences wanted to cheer for the military that kept them safe from the commies (a la Maverick and Ice Man) and not see them portrayed as sadistic, battle-happy Ahabs like John Ashton’s Lt. Col. Nevitt.

It was no longer fashionable in 1986 to portray soldiers as bloodthirsty buffoons, which probably meant any King Kong movie would have been doomed to fail at the time—since we can’t cheer for the dudes whose job it is to kill the big ape we love.

King Kong Lives ends with Kong smashing Nevitt into the ground (a moment the marketing team used as the capper of their trailer and TV ads) before his artificial heart gives out just in time for him to share one brief moment with his newborn son (it is to the filmmakers’ credit that they spare us the scene of the child’s conception). Lady Kong and Kong Jr. are safely transported to a safe-haven in Borneo in what is meant to be a happy ending, but feels more like a threat for a third film that never came.

As this is being written, Legendary Pictures is working on Skull Island, a kind-of sequel to Peter Jackson’s take on this material. Like De Laurentiis, they seem to be moving forward on the fact that the first film did well at the box office, even though Jackson’s King Kong is a film few people seem to love or talk about nine years after it was released (and like De Laurentiis’ film, is largely regarded as being a bomb because it failed to be the biggest success of all time). Will history repeat itself? Who knows? Skull Island may end up being awesome. One thing I do know is that it’s going to have to try really hard to be as underwhelming as King Kong Lives.