Upon hearing the premise of Hataraku Maō-sama! (The Devil is a Part-Timer! or, alternatively, Demon Lord at Work!, 2013)—to put it briefly, Satan himself seeks employment at McDonald’s (excuse me, I mean “MgRonald’s”) in order to conquer the world—it immediately became one of my most anticipated viewing titles of the year. Adapted from a light novel (and also boasting a manga adaptation as well), I found The Devil is a Part-Timer! to be an extremely bemusing romp as the setting alternated between modern-day Japan and the high-fantasy world “Ente Isla” (a fictional realm whose name may be a creative stab at a pseudo-Romance language or perhaps a Japanese attempt at Latin akin to Puella Magi Madoka Magica (2011)).

While the surface-level usage of Biblical concepts encased in an aesthetic veneer of medieval Christianity was entertaining enough (as is often the case with Japanese and other non-Western perspectives of the various edifices of Judeo-Christian culture), the real joy to be had in this series is in the mundane interactions of the characters: Emilia’s frustration with her call center job (I can relate), Alciel’s penchant for formalities and housekeeping, and of course Satan’s tendency to dramatize the otherwise unremarkable (such as his introduction to the Japanese dish katsudon which quickly became the menacing “katsu-doom” in the first episode). 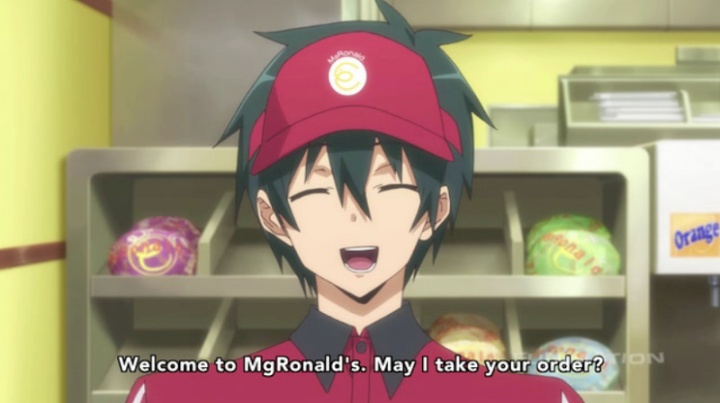 The series’ true charm, however, comes from its very Millennial-centric tones: the type of which, through the lens of hindsight, has evidently become one of the distinguishing factors of narrative-fueled media of the early twenty-first century (be it intentional on the part of today’s authors or coincidentally plucked from the collective ether of the noosphere). Many have already sensed a marked ripple radiating through the currents of the popular culture as much of the cohort of Generation Y has collectively matured, finished their excursions through post-secondary education, and subsequently had their bubbles burst after being flung into the apathetic workforce. The Millennial generation was raised on a diet of encouragement for unfettered dream-making with a side of extra-large fries: after being unceremoniously awoken to the realities of tending to the minutiae of everyday life along with competing in a sea of overqualified peers and non-hiring employers (speaking of hindsight: the inevitable dead-end destination on the road of credentialism), the drop back down to earth was embittering for many to say the least.

The odd combination of possessing confidence emanating from genuinely obtained skill sets (be they book or street smarts) and the impression of having no legitimate outlet for their newfound abilities often gives today’s youth unshakeable feelings of futility; so when Satan—the master of a fantastic faraway realm with incredible powers—came crashing down to Earth bearing neither title nor magic, as an aforementioned Millennial college grad myself, I could definitely relate.

Returning to the particular flavor of self-disparagement mentioned earlier, I am reminded of other titles such as Yūsha ni Narenakatta Ore wa Shibushibu Shūshoku o Ketsui Shimashita (or I Couldn’t Become a Hero, So I Reluctantly Decided to Get a Job, 2013-2014)and the incredibly popular Wanpanman (One-Punch Man, 2015). In the former (like Part-Timer!, originally a light novel), a young hero has the proverbial rug pulled out from under him when his demonic antagonist falls before he is able to conquer him and thus heroically save the day: he then gets a day job at a department store. (Incidentally, unlike Part-Timer!, the anime bears the signature of director Kinji Yoshimoto via its incessant voyeuristic camera shots.) In a similar vein, One-Punch Man’s Saitama is hilariously overpowered and able to easily defeat foe after foe…but, to his dismay, he is not the instant celebrity he thought he would be and receives little recognition for many of his heroic efforts. Works like these—which depict individuals who are special and gifted, if only the big bad world would take notice (as opposed to many of the titles of my youth which depict an unlikely protagonist with latent, unique abilities overcoming incredible odds and attaining a sense of accomplishment)—strike a chord with many disenfranchised young adults today, whether it be in the U.S., Japan, or elsewhere (perhaps even Ente Isla denizens, too); consequently, I doubt this current trend of filmmaking will cease any time in the near future.

My only subjective complaint about the Part-Timer! anime (I am unfamiliar with the light novel and manga versions, thus my criticism will focus only on the anime in terms of quality and not in a sense of adaptive faithfulness) is in the decided direction of the plot itself. As I was on the hunt for something cliché-shattering or at least bold enough to go a little bit against the grain, the prospects of a title depicting Satan—you know, the epitome of evil and the father of lies, i.e. not a nice person—diabolically scheming to literally take over the world by flipping burgers sounded like a worthy candidate. I thought for sure it would simultaneously be a light-hearted, side-splitting seasonal favorite (which to be fair, it was) while also being a clever commentary on capitalism; or, perhaps an allegoric take on corporations and the food industry in relation to economic inequality similar to Upton Sinclair’s The Jungle.

Alternatively, I imagined it could be a laconic lampoon of religion in general while still retaining an air of lightheartedness and promoting multiculturalism. Instead, while I was pleased to experience its varying degrees of slice-of-life conventions mixed with action, the only thing that truly surprised me about this title was how unsurprising it ultimately became: the refreshingly atypical premise was followed by a rather banal presentation of typical anime fare centered on a cookie-cutter example of the ‘Good All Along’ trope with some ecchi humor sprinkled on top for good measure. As I said, this is all subjective (meaning it’s only my opinion, so feel free to disagree) but call me crazy for wanting Satan to be Satan. (As you may be able to guess, I love Jhonen Vasquez’s Invader Zim (2001-2006) precisely because the protagonist tries desperately to actually conquer Earth while lacking the capacity to do so effectively: it’s comedic gold, fairly unconventional and, to my knowledge, has yet to be duplicated—but I digress.) 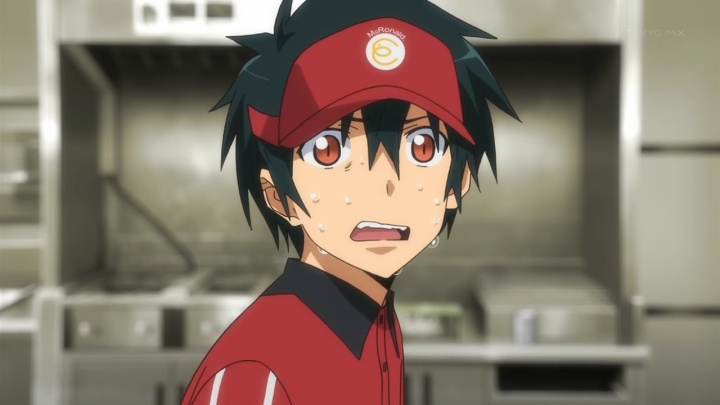 Despite the minimal letdown incurred after my first viewing, I would recommend The Devil is a Part-Timer! to any contemporary anime patron looking for something new and fun. Its characters are memorable and its jokes are rib-tickling, and it’s all encased within a structure appealing to fans of both sword-and-sorcery settings and modern slice-of-life setups. Whether you find yourself eagerly waiting for more content or simply moving on to greener pastures, if you find yourself crash-landing in the world of Part-Timer!, know this:you’ll never be quite the same afterwards. In fact, if I’m right, you’ll probably forever refer to your tonkatsu or katsudon affectionately as “katsu-doom!”