Like the countless other viewers who eagerly awaited the premiere of Kill la Kill (2013-2014), I was initially excited to experience the next big project helmed by the team of veteran filmmakers responsible for the homage-laden tribute to the Leijiverse known as Tengen Toppa Gurren Lagann (2007). (In a parallel universe, Kill la Kill is a Gainax production, but I digress.) Admittedly, my first impressions were less than stellar; as to be expected from the current cultural climate of anime, Kill la Kill seemed to exhibit most of the telltale signs of yet another otaku-pandering money grab in which the elemental ingredient of fan service had been forcibly stretched to the point of banality while being overstated into a genre all unto itself.

Though the creative decision to make the protagonist and various antagonists female was a welcomed distinction from aforementioned Gurren Lagann (as Kill la Kill is, at its core, a gender-swapped retelling of the manga Otoko-gumi), the extremely ecchi transformation scenes of Ryuko Matoi and other characters seemed to indicate that Kill la Kill sought to send a very different message to viewers than those of its stylistic older sibling TTGL: whereas Gurren Lagann told its (predominantly male) viewers to never give up and unlock their full potential, Kill la Kill appeared to be spinning a subversive narrative that to get anywhere in this world, you have to be willing to take off your clothes (a theme of exhibitionism that historically has been aimed predominantly at girls more so than boys across countless cultures). I suspected that perhaps, like director Hiroyuki Imaishi’s and screenwriter Kazuki Nakashima’s prior jaunt Re: Cutie Honey (2004) (yet another adaptive remake of Go Nagai’s popular creation), Kill la Kill was mostly just fun and games for grownups.

A far cry from the comparatively modest Sailor Senshi transformation sequences of the Sailor Moon franchise, the likes of film theorist and feminist icon Laura Mulvey would no doubt have a field day with the imagery presented in Kill la Kill: through her writing, it was she who taught me that, unfortunately, with regards to the portrayal of a woman’s likeness in media, it is all too often the case that “cinema builds the way she is to be looked at into the spectacle itself” (208). It wasn’t long before I succinctly—or rather, prematurely—summed up that while it boasted impressive action sequences and an interesting premise, under a more critical analysis and the scholarly scrutiny afforded by an understanding of the hegemonic quality of the male gaze, Kill la Kill surely couldn’t hold up justifiably to the acclaim it garnered. 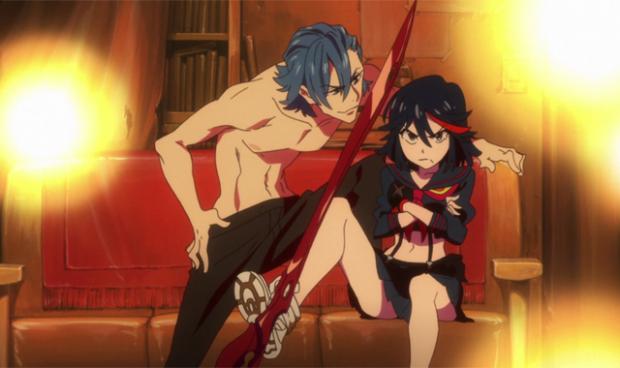 Beyond the series’ surprisingly pro-feminist ideals—including Satsuki’s mother, Ragyo Kiryuin, being neither symbolically maternal nor passively affectionate, but instead ruthlessly exploitative of her own child (in a brilliant nod to Gendo Ikari of Gainax’s Neon Genesis Evangelion (1995-1996)—another profound message pertaining to young people of any nation can be extrapolated. As much as Kill la Kill is about surface-level ecchi gimmicks and spectator titillation, it is equally (if not more so) about the power of fascism.

As much as Kill la Kill is about surface-level ecchi gimmicks and spectator titillation, it is equally (if not more so) about the power of fascism.

As anime casuals and connoisseurs alike could attest, there is certainly no shortage of school uniforms being fetishized in anime and manga—but in Kill la Kill, the emphasis on the military-inspired uniforms serves greater ends than being cleverly interwoven into the plot. Never before had I ever encountered such poignancy from a televised mainstream work of anime relating to this subject: in a truly novel way, Kill la Kill consolidated both the historical significance and societal pertinence of the seifuku in an unexpectedly avant-garde style.

The aura of fascism in the abstract has been manifested through, and solidified by, the cohesion afforded by uniformity of attire throughout history. Accordingly, sacrificial bloodshed through war has been the standard method of payment demanded by demagogues the world over to achieve their espoused ideology (akin to the blood toll required by the Kamui to function). And just as young minds are often the most fertile soil in which to plant the seeds of new ideas, so too are the young often the ones bearing the brunt of costly revolution: those with an agenda to assert are drawn to the vigor and naiveté of youth.

As numerous writers have documented, in the context of Kill la Kill it is no mere coincidence that Japanese pronunciations of “fascism” (“fassho”) and “fashion” (“fasshon”) are extremely similar; nor did it go unnoticed by the production staff that the pronunciation for aforementioned school uniforms, seifuku, is identical to the Japanese word for “conquest.” Again, to reiterate the overarching thesis of the work’s duality, the main characters of innumerable anime plotlines are often adolescents nearing the cusp of adulthood; but in Kill la Kill, the purpose of the high school setting is not due to the whims of its creators wishing to vicariously relive their glory days through an idealized prism of nostalgia (or, as previously mentioned, for fetishistic reasons).

Though the weakness of youth may be a propensity towards naiveté, unbeknownst to most teenagers and twenty-somethings, they are actually in the prime of their lives to profoundly affect society. Unrestrained by familial commitments and not weighed down by the excess mental baggage of preconceptions, teens and young adults have the ideal mixture of optimism, discontent, and lack of certain societal inhibitions to bravely challenge the status quo of their respective upbringings in order to bring about progress. Their rebelliousness is simultaneously loathed and envied by adults, as it is soon supplanted by the compliance and complacency endemic to adulthood.

Thus is injected powerful meaning and profound takeaways into what may otherwise be odd lines of dialogue found throughout Kill la Kill, such as the dramatic reveal delivered by Ragyo to a captive Satsuki in regards to the latter’s strategy of directing resistance efforts towards teenagers who haven’t yet lost their rebellious nature: “If humans wear clothing for the first twenty years of their lives, their resistance to clothing completely disappears. Center your efforts around students in their late teens who haven’t lost that resistance, and defeat me” (“Raindrops Keep Falling On My Head”). Clothing here metaphorically represents ideas and ideologies, ways of thinking and modes of functioning: we adults have a tendency to become jaded and stuck in a rut, going through the motions of life without questioning authority. Impetuous teenagers, on the other hand, can be quite dangerous if allowed to think critically and freely before being indoctrinated into conformity.

Awareness tempers programmed behavior, but it takes continued exertion and energy to do so—something most adults are unwilling or unable to do (mostly due to their numerous responsibilities). As we become more and more set in our ways, we become more acclimated—more comfortable, if you will—to our accepted reality, the unwritten norms of society, and the unspoken rules of the current de facto standard. Like a favorite pair of broken-in jeans, without even realizing it we’re donning our personal tried-and-true philosophies unconsciously every morning before we walk out the door; and, like donning clothing of any kind, it is basic etiquette expected to be followed by every conscionable adult. 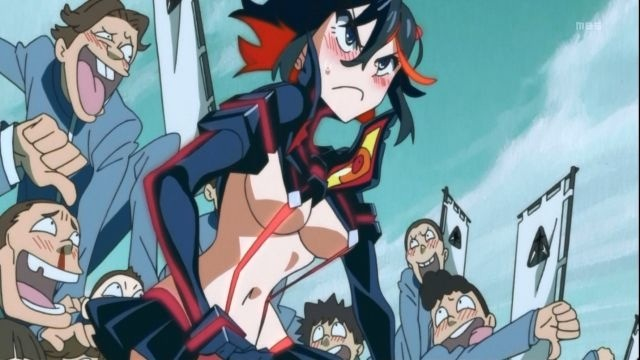 As I have noted elsewhere within analyses of masterful works such as The Legend of Black Heaven (1999), such a command of concept and expression, with clear articulation of form and meaning (traceable in part to the Japanese love of puns and clever wordplay) deserves adulation; by making seifuku the literal embodiment of power in the show, the vehicle for metaphorical takeaway, and the historical takeaway itself—or, as I like to phrase it, making the figurative distance between metaphoric constituents as minute as possible—Studio Trigger’s Kill la Kill will be remembered for its well-earned prestige and, hopefully, utilized for political introspection in the future.

Is Kill la Kill a contributory savior to anime as a whole? Or is it only fodder for internet smut? I would personally contend that it is neither, and yet perhaps a little of both…

In closing, Kill la Kill has received the full gauntlet of criticism and reception: some espoused its noble feminism and its latent complexity, while others denounced it as little more than flavor-of-the-week rubbish; all while some critics (including yours truly) remained dubious. Is Kill la Kill a contributory savior to anime as a whole? Or is it only fodder for internet smut? I would personally contend that it is neither, and yet perhaps a little of both: like most complex facets of humanity, it is a contradiction unto itself in many ways. It contains raunchy footage clearly meant to garner the infamous male (or, more appropriately, masculine) gaze, but it also invites intelligent conversation concerning the psychological effects of dominance and submission; and rather than cast females as ancillary objects of affection for a male protagonist, the narrative centers on leading ladies and tackles feminine issues including self-confidence and impending womanhood—but these same female characters are also cast as erotic objects for spectators’ pleasure time and again.

Whether you enjoy Kill la Kill or do not (and whether the former or latter is due to surface-level fan service or deeper meanings) is your prerogative. But to those who seek it, Kill la Kill offers varying layers of intricacy ripe for academic cultivation which extends beyond mere escapism. As for me, in addition to the joyous opportunity it has provided for scholarly discussion (even if it’s mostly intellectual masturbation, but again I digress), I have also absorbed profound takeaways of my own: once in a while, dare to go “naked” when approaching a dilemma. Adorning ourselves with the customs and beliefs we’re used to is fine, but left unchecked our habits will yield complacency; and too much complacency breeds apathy, which is all the foothold a power-hungry opportunist like Ragyo needs in order to subjugate the masses and wield her destructive influence. If we train ourselves to step out of our own shoes once in a while, and to look at things more objectively from a clean slate, we can often find new solutions to seemingly unsolvable dilemmas—solutions which normally might not be afforded by our own preconceptions and self-imposed mental barriers.

Take a page out of Kill la Kill’s book: every day is its own beast, and brings with it different challenges for us to face. Metaphorically or otherwise, sometimes the weather’s sunny and clear, and sometimes it’s rainy and overcast: no single outfit can prepare you for every type of weather, just as no singular outlook on life can equip you for every contingency. So don’t be afraid to change up your “outfit” once in a while! It just might come in handy someday, and besides…you might even look really good in it.